Jack Mundey, an inspirational giant and legend of the Australian trade union, environmental, communist and socialist movements, died two weeks ago at the age of 90. 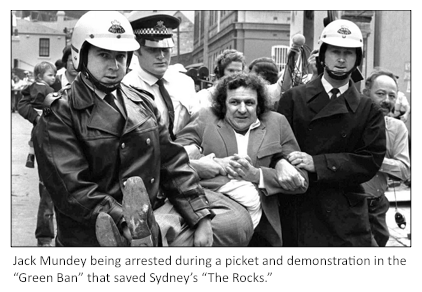 Jack was one of Australia’s most famous and well-known people, a trail-blazer who leaves a legacy of achievements that will be forever remembered. Thousands of tributes from organisations and individuals poured in and many were published on mainstream media, spreading also to social media commentary across much of the political spectrum.

Jack was a member of the SEARCH Foundation (www.search.org.au ) and The Greens and, before that, a longstanding member of the Communist Party of Australia (CPA). He strongly supported and promoted the CPA’s new direction and policies of the late 1960s and early 1970s for a democratic vision of socialism and support for the newly emerging social movements around women’s liberation, preservation and care for the natural and built environments, workers control, Indigenous rights, and gay liberation, among others.

Jack Mundey will be especially remembered as the architect of the Green Bans that preserved for posterity some of Sydney’s landmark historical buildings and spaces, among them the Rocks area on the Harbour foreshore opposite the Opera House, working class inner suburbs like Woolloomooloo, and also Centennial Park.

The Green Bans started with a ‘black ban’ by the union that Jack led, the NSW branch of the Builders Labourers Federation (BLF), on a proposed development at Kelly’s Bush, a small area of bushland in the upper middle class suburb of Hunter’s Hill. The union imposed the ban in 1971, after requests from a group of local women who had been campaigning to stop the development. Jack told them that the union would impose the ban if the local people supported it, and a meeting of 600 residents did so. Shortly after imposing the ban, Jack decided that it should be called a “Green” Ban. The rest is history.

At the time, others on the left and in the trade union movement saw environmental issues as marginal or even a middle-class indulgence. Jack, as the leader of a traditional industrial union, saw that the environment, both natural and built, was a central issue of the times, and moreover one that workers and their unions should be interested in and active around. He developed and promoted the idea that workers should not only be interested in their immediate wages and conditions but also in the purpose of their labour, its social value and outcome. 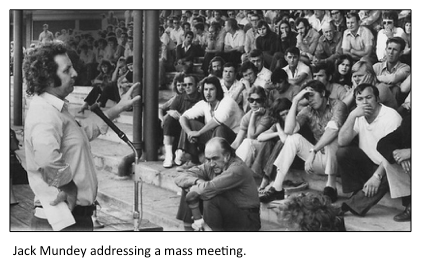 Jack had the great ability to explain these issues to his own members and to win their support time and again for Green Bans to preserve historical buildings and sites. He was also a brilliant orator and media communicator in explaining the Green Bans to all Australians, and became an inspirational figure across many sections of society. Nobel-Prize-winning author Patrick White, upon accepting the award as 1974 Australian of the Year, named Jack as one of three ‘mavericks’ who should share the award with him.

The leadership of the Builders Labourers – Jack Mundey, Joe Owens and Bob Pringle – organised and inspired members to win decisive wages and safety struggles in an anarchic industry. The members responded to their determination to “civilise” the industry, and embraced the new democratic practices that transferred power to them within the union as well as on building sites. The industrial practice of the union was essential for its breakthroughs with Green Bans, and also its solidarity support for First Nations struggles, students, gay liberation, women working in the industry, and ending the war in Vietnam.

Jack Mundey’s achievements, legacies and influences on Australian life and politics are way too many to list. For that matter, the Green Bans in particular were recognised world-wide as an example for others to follow. It is said that the name Green Bans was a key influence that led the German activist Petra Kelly to call her new party The Greens (Die Grunen), after she visited Australia in the mid 1970s to speak at rallies against uranium mining and met Jack Mundey.

Jack’s Role in the Communist Party of Australia

Jack played an active political role in the Communist Party of Australia. He was a member of its National Committee for several years and for a short time was CPA National President. He strongly agreed with the CPA’s support for Alexander Dubcek’s “Prague Spring” and “socialism with a human face” in Czechoslovakia in 1968, and also strongly supported the CPA’s condemnation of the Soviet invasion of Czechoslovakia in August 1968. This invasion not only crushed the rights of the Czechoslovak communists and people, but was probably the moment that also crushed any possibility for reform of the Soviet Union itself, thus helping to ensure the later collapse of the central command-control model of socialism.

Jack was very clear about these issues and often spoke publicly about what was wrong with the Soviet model of socialism and the need for a democratic model in keeping with his own and his union’s political practice. 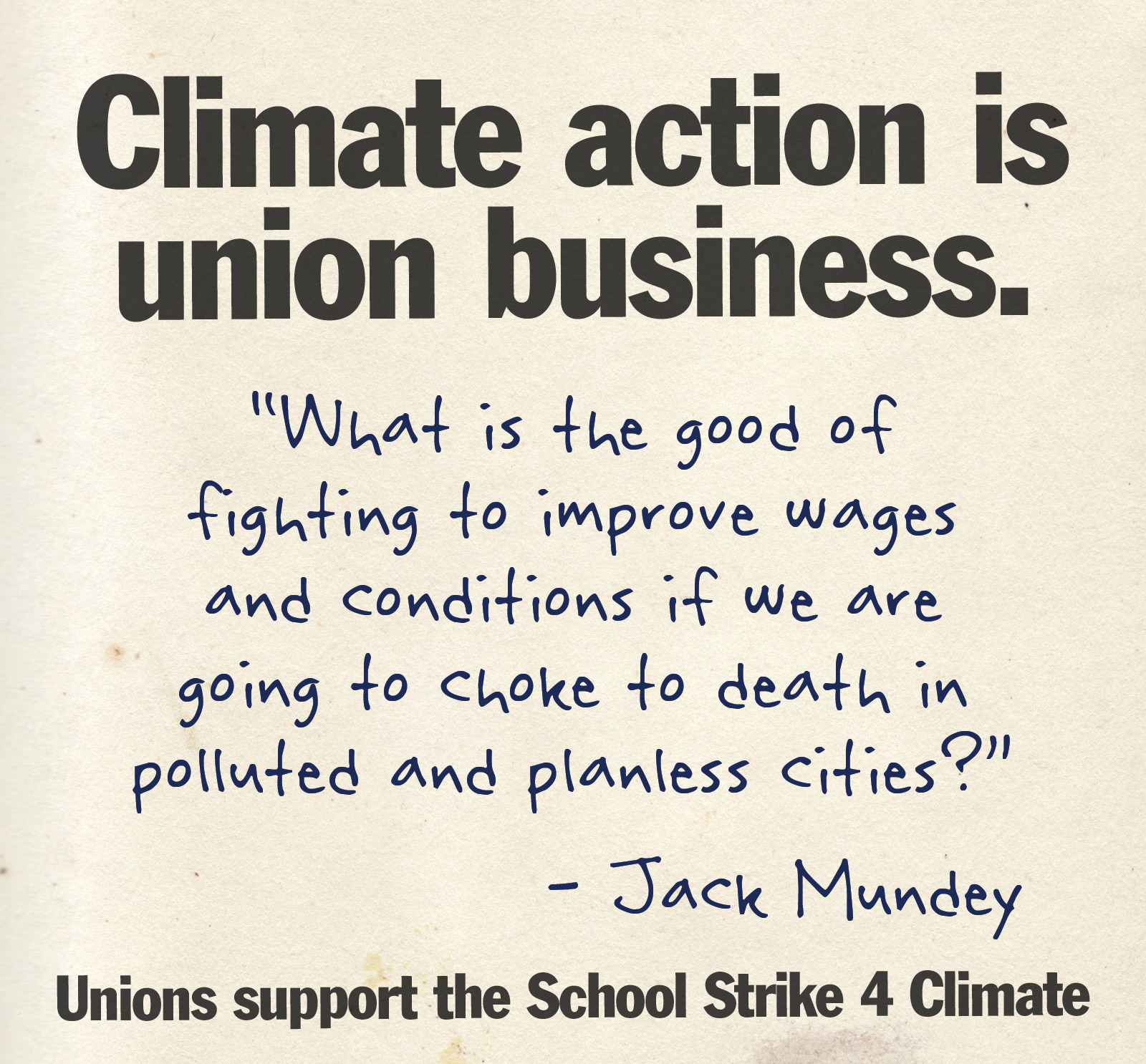 Jack became a member of the Council of the Australian Conservation Foundation and was appointed to various other positions, such as Chair of the Historic Houses Trust under the NSW Labor government of Premier Bob Carr. He played an active role in numerous environmental causes, movements and organisations into his late eighties. He had significant international connections, including with German Greens Party founder Petra Kelly, the World Watch Institute in Washington DC, and a building union in Birmingham that helped save the historic Post Office in that city.

Jack read very widely on environmental issues, including the Club of Rome Report in the early 1970s. He was an extremely rare example (at the time) of a union official who saw that consumer capitalism was destroying the planet. One of his central themes was that there was little point in workers winning higher wages and better conditions if the products of their labour were destroying natural environments and human-made heritages. As the threats of climate catastrophe escalated during his last two decades, Jack emphasized this message with increasing urgency.

Active to the End 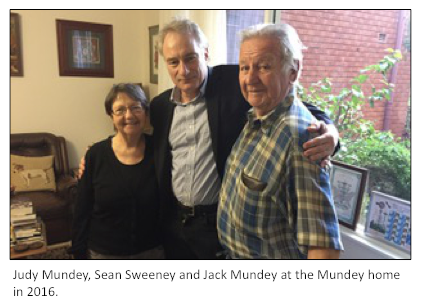 Jack remained active right up to his last years, joining the struggles to save other parts of Sydney’s heritage and working class buildings.

Just a couple of years ago he met and talked with TUED’s Sean Sweeney and heartily endorsed TUED’s activities as consistent with his views about the potential role of unions in rescuing the planet.

To hear Jack Mundey in his own voice, please click here. There is also the excellent documentary that describes the Green Bans in graphic detail, Rocking the Foundations.

For some additional reading on the movement Jack helped inspire, you may also want to read:

The Liberal-National (conservative) State Government of New South Wales has offered an official State Memorial Service to Judy, who has accepted the offer. This service will be held when the current COVID-19 restrictions are sufficiently relaxed to allow such a service to take place.

This is the ultimate tribute to and victory for Jack’s ideas and activism, because it was a government of the same political stripe that permitted the big developers to tear down Sydney and sent in its police force to protect the demolishers and arrest Jack and other BLF officials and their community supporters.

Under that earlier government in the mid 1970s, the historic Rocks area of Sydney would have been razed to the ground for a huge ugly development had it not been for months of struggle and contention led by the BLF. Instead, this piece of history has been preserved, and a Jack Mundey Place is now a part of the historic precinct.

We express our deep condolences to Judy Mundey, Jack’s partner in life and politics for over 55 years, and to Jack’s many comrades and friends.