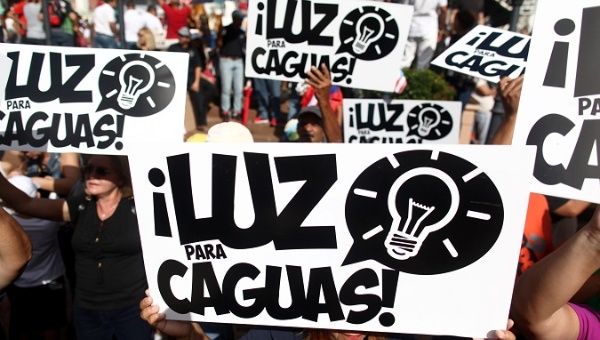 The main power union in Puerto Rico (Union of Workers of the Electric and Irrigation Industry, UTIER) has issued an updated set of proposals for the reform of the public utility (PREPA) (espanol aqui). On Thursday, March 8th, UTIER president Angel Jaramillo told a group of TUED unions and allies in New York that the union would take the fight to keep PREPA public–and to make it fully accountable and responsive to communities–into the global trade union movement.

Issued on March 13th from San Juan, UTIER’s proposals include a call for a transition towards renewable energy “kept in public hands” and to “create a (PREPA) Board composed of sectors of diverse interests of society: industrialists, merchants, trade unions, consumers.”

In late February, UTIER declared its opposition (English and en espanol) to governor Ricardo Rossellá’s privatization plans, stating that hurricane Maria was being used as an opportunity for the political and business elite to sell the utility and, with it, the obligation to provide electricity as a right. UTIER had said:

The position of UTIER is that electricity is a human right and not a commodity. That is what our people have realized after the ravages of hurricanes Irma and Maria, after having run out of electricity and suffering so many hardships and the loss of family members, either because they have died or had to leave the country. That is why we strongly oppose privatization in any of its expressions, whether through the transfer of assets or the transfer of management to private companies. We ask the people the following question so that they think clearly about it: If PREPA was not profitable and able to generate profits, would there be a company that wanted to acquire it?

The public utility, PREPA, can be reclaimed and restructured in order to ensure, first, that the energy transition can be planned and implemented over a period of years and that renewable sources of energy serve everyone-and not just those who can afford solar panels, microgrids, and battery systems. Space can be created so that communities have a real voice in the installation, operation, maintenance, and management of local energy systems with a strong emphasis on conservation and efficiency. But public-worker control of the overall service is also important, because this is where decisions about the direction of the island’s energy future will need to be made. The goal here is not to sell electrical power to the grid for profit, but to make sure systems are operating well and are responsive to public needs and concerns.