TUED Bulletin #68: The Invisible Crisis of Wind and Solar Energy–and the Urgent Need for a Public Approach 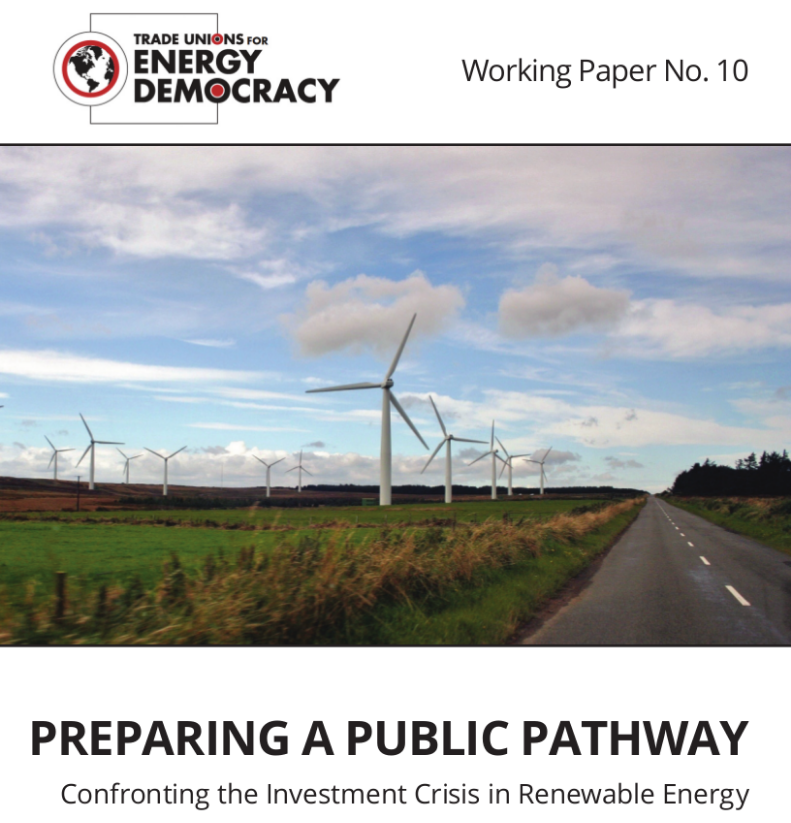 Why, in a world awash with “idle capital” and in desperate need for a just energy transition to renewables-based energy systems, are global investment levels in renewable energy so obviously out of sync with climate targets?

According to a 2016 report released by the International Energy Agency, “Market-based, unsubsidised low-carbon investments have been negligable.” Without public money, the levels of modern renewable energy would be abysmally low. The tenth TUED Working Paper, Preparing a Public Pathway: Confronting the Investment Crisis in Renewable Energy describes how public money is papering over the fundamental failures of so-called “competitive” electricity markets. Public financing is increasingly being used to provide “certainties” for private companies and investors in the form of “power purchase agreements” or PPAs. PPAs make renewable energy expensive and vulnerable to the kind of political backlash we’ve seen across Europe and elsewhere. As a result, the entire energy sector becomes starved of investment and saturated in “political risk.”

“Preparing a Public Pathway” is available for download now (PDF)

From the Working Paper:

The dominant policy institutions have concluded that the market model that emerged from privatization and liberalization has proven to be an impediment to the kind of energy transition that is required. These same institutions instruct governments to increase their role as enablers of investment, by absorbing risk, providing support, and guaranteeing revenues and returns through P3s and PPAs.

The introduction of “capacity payments” speaks to the extent to which the “competitive market” is not only no longer competitive, it can no longer be usefully described as a market. Rather, we see governments, trying to ensure the energy-demand needs of the entire system are met, paying for unused electrical power—from both incumbent utilities and renewables companies—in order to ensure that all providers walk away with “returns on investment” that they (and the investors behind them) consider “satisfactory.”

One of the main goals of Preparing a Public Pathway is to provoke discussion among unions and their allies about the need to further cultivate a pro-public trade union counter-narrative that is clear, bold and persuasive, and—given the formidable nature of the challenge—offers some hope of decisively interceding in the global energy system’s worrying trajectories. Such a narrative must be able to assert, confidently and from an informed perspective, that only a planned, coordinated, publicly driven approach to investment has a credible chance of delivering the dramatically scaled up deployment of renewable power that we urgently need.

We highly recommend downloading Working Paper’s “Background Notes”. This separate PDF contains charts and quotes from leading policy voices that, for formatting reasons, were not included in the main report. These quotes and charts are useful for presentations, workshops and union policy discussions:

Quotes from both the main paper and the Background Notes that unions and allies can use when advocating for public renewable power:

Clearly, a lot more investment is needed to close the gap between where we are today and the money we need to transition the world to a low-carbon economy. —Namrita Kapur, Corporate Partnerships Program, Environmental Defense Fund, Report

To attract private capital, climate investments must fit with the investment preferences of the investors. —Climate Bonds Initiative  Report

The persistent financing challenge [confronting renewables] demonstrates a clear need for longer-term federal assistance and provides a justification for the creation of a new and permanent agency. —American Council on Renewable Energy  Report

You can have renewables. Or you can have the market. You cannot have both…. If renewables are a must-have, then nationalisation is the answer. —Conservative think tank, Centre for Policy Studies, UK.  Report

Energy Transition: Are We Winning? (2017)
Carbon Markets After Paris, Trading in Trouble (2016)
Power to the People: Towards Democratic Control of Electrical Power Generation (2014)

Failure of a Success Story: Once the world leader in renewable energy, investment levels the European Union’s (EU) have collapsed, deployment has slowed dramatically, and climate targets are in serious danger of not being reached. Despite the failure of competitive energy markets in the EU, governments around the world are liberalizing and privatizing the power sector in order to drive renewables. 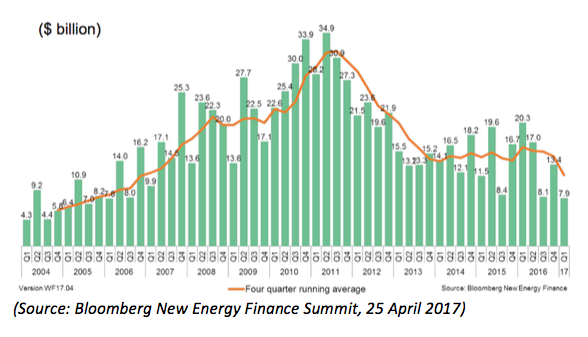