TUED Bulletin 58: Why U.S. Unions Marched for the Climate 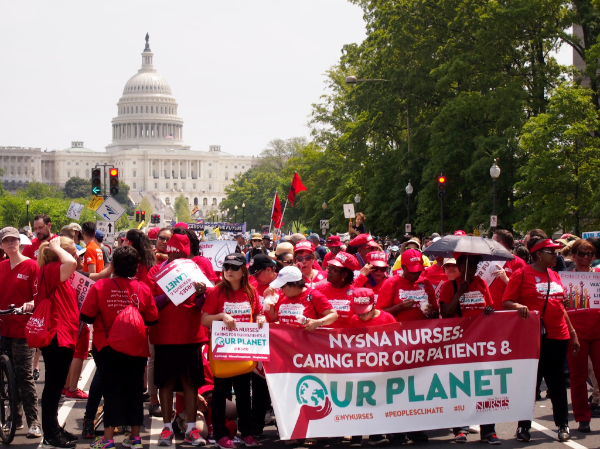 On Saturday, April 29th, unions from around the country and from a wide range of sectors joined tens of thousands of others for the “People’s Climate March” in downtown Washington, D.C., braving the 33-degree Celsius heat to take to the streets in a massive demonstration of resistance to the Trump administration’s “energy superpower” agenda, its attacks on environmental regulations, and its reckless promotion of climate change denial.

According to climate activist group 350.org, more than 200,000 people marched in the U.S. capital, with coordinated marches and demonstrations across the country and beyond. The record  temperatures in Washington — which equaled the previous record for April 29th, from 1974 — only underscored the importance of the action and the significance of the large turnout, which exceeded predictions.

The labor contingent for the march convened in front of the U.S. Department of Labor for a preliminary rally. Leaders from several unions and networks addressed the gathering crowd before lining up to join the main column for the march up Pennsylvania Avenue to surround the White House for the feature rally. 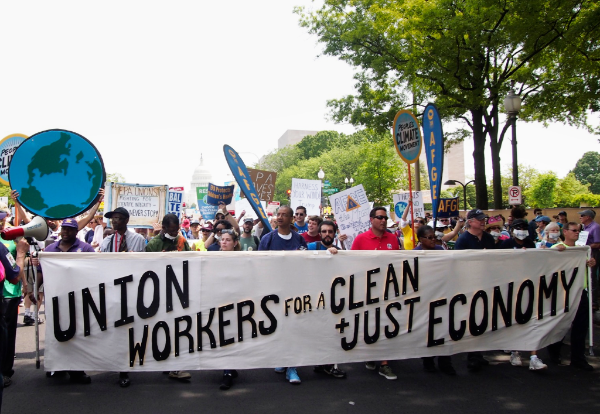 In a statement issued before the march, Jean Ross, (a Registered Nurse, or RN) co-president of National Nurses United (NNU), spoke about why their members continue to be so actively engaged in struggles for climate and environmental justice:

“As patient advocates, nurses know that it’s our duty to follow the path of a public health crisis out into the world, where it begins, and to fight for environmental justice to prevent our patients from becoming sick or injured in the first place. That’s why we’ll be standing up all across the country this Saturday and demanding an end to corporate projects that poison the environment, that jeopardize the climate, and that put private profit over the health of people and the planet.”

Another healthcare union prominent amidst the labor contingent was 1199 SEIU, which released several testimonials from its members in the lead up to the march, similarly emphasizing their commitment to “the total well-being of our patients, families and communities.”

“Every day SEIU members and our communities experience the impact of toxic pollution in our air and water and the catastrophic impacts from climate change that are made worse from this pollution. We march because we are on the frontlines. As working people, people of color and immigrants, we march because our families are disproportionately hardest hit by pollution and climate change’s impacts.”

On Friday afternoon before the Saturday march, TUED’s Sean Sweeney and John Treat participated in a meeting convened by Naomi Klein and Avi Lewis, bringing together roughly 30 labor, community and social movement activists and organizers, to reflect on possibilities for building on the Canadian “Leap Manifesto” framework to advance the struggle for energy democracy and just transition in the U.S. context. The meeting was hosted by the American Postal Workers Union (APWU) at their headquarters in downtown Washington, D.C.

Friday evening, the Labor Network for Sustainability (LNS) organized a welcome reception for labor delegations participating in the march. LNS had played an important role in building union participation in the April 29 demonstration. 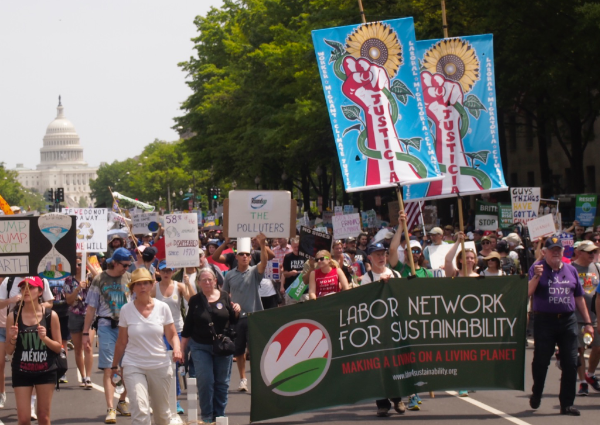 The full statement from unions participating in the march is available online.

Please click below for a short video clip that conveys a bit of the scale and energy of the march.

We resist. We build. We rise.

This is what it looks like when 200,000 people march together for climate, jobs, and justice. It is absolutely beautiful. Together, we will chart a different path forward: away from Trump’s agenda of a cruel, polluted, and divided country, and towards a clean energy economy that works for everyone.